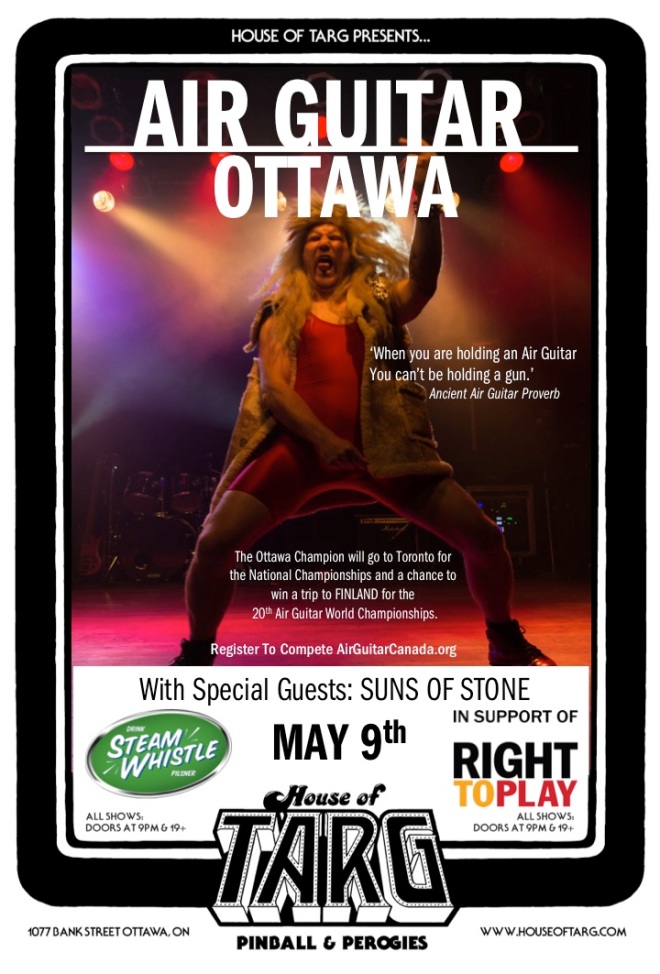 May 9th, 2015 will go down in history and infamy as the day Canada’s capital city hosts their first ever ‘official’ Air Guitar Championships. It makes perfect sense that The House of Targ, Ottawa’s most kick-ass eatery and music venue should bring the freak-show party of Air Guitar to the citizens of Bytown. Ottawa rockers, SUNS of STONE, will headline this night of pure spectacul-Air rock-awesomeness.

So Ottawa… bring us your metal heads, your bangers, your punks and your rockers. We want your comedians, your performers, your goofs and your clowns. We want your lovers of music, purveyors of good times, champions of world peace and bringers of joy. We want all the fans and friends to cheer like leaders and holler like Stefanis. We want Ottawa to rock so hard every pinball game gives out extra balls and Mike Duffy gets another cheque from Nigel Wright, just because.

So you’re intrigued? Good. You should enter to compete.  Prepare a 1-min performance of your choice. Air Guitar like a demon. Get ‘judged’ by celebrity judges using the figure skating scoring system of 4.0 – 6.0. Make it to the second round. Improvise your Air Guitar to a song chosen by the audience. Win. You’re now Ottawa’s first-ever Air Guitar Champion. Go to Toronto. Win. Now your the Canadian Champ. Fly to Oulu, Finland for the 20th Air Guitar World Championships. Win that too? There’s a story for the grandkids.

The saying goes: “When you are holding an Air Guitar, you can’t be holding a gun”

We do this for World Peace and specifically to benefit the kids who get support and programmes from the people at Right To Play Canada who help children facing adversity due to war, poverty, famine and disease. We made $2500 for the charity last year and hope that Ottawa can help us raise some more.

Admit it, you want to. Be a volunt-AIR of the most rocking proportions. Go all the way and we send you, our national champion to Oulu, Finland for the Air Guitar World Championships. Flight and Hotel paid. You get the experience of a lifetime to participate in 20th year of Air Guitar. Here’s the promo video from last year’s competition:

He Kan and he did…

Some people call him Rick.…

Getting Stood Up At Nationals…

RED DEER DOES THE KESSEL…